24th February 2021: Oxford and Manchester, UK.  Cytox Ltd, which provides non-invasive, risk assessment and patient stratification tools for Alzheimer's disease (AD) and dementia, announces the launch of its new genetic test, genoSCORETM-LAB, that can predict the risk of an individual’s cognitive decline due to Alzheimer’s disease.

The test analyses an individual’s genetics against an array of over 100,000 single nucleotide polymorphisms – common genetic variations - that are associated with, or protective against, the risk of developing Alzheimer’s disease. This broad genetic analysis enables the test to generate an overall risk of cognitive decline due to the disease.

genoSCORE-LAB only requires a blood or saliva sample. An easy-to-use mouth swab enables individuals to provide a sample from home if they are self-isolating due to COVID-19, or not wishing or easily able to attend a healthcare setting. As such, genoSCORE-LAB offers an easy to access alternative to existing invasive lumbar puncture tests, and expensive scanning procedures.

Dr. Richard Pither, CEO of Cytox, commented: “While there are many exciting drug candidates in development to treat Alzheimer’s disease, a comprehensive suite of effective therapeutics is still some years away. However, research has shown that lifestyle changes can significantly mitigate the risk of developing Alzheimer’s disease, delay the onset of symptoms, and slow the rate of disease progression(1-5). Our new test can identify those patients most at risk of cognitive decline due to Alzheimer’s, enabling them to take decisive action to manage their disease progression.”

The risk of developing Alzheimer’s disease has several components. Depending on an individual’s genetics, they may have been born with a higher or lower risk of developing the disease. This genetic risk remains constant, but overall risk increases with age.

However, this is not the whole story and other external factors can also contribute to the risk of developing Alzheimer’s disease and cognitive decline. Fortunately, there are many positive steps you can take that have the potential to delay the onset of Alzheimer’s disease.

With modifiable factors accounting for more than 30% of the risk for Alzheimer’s, the adoption of behaviours to monitor and treat factors such as hypertension, type II diabetes, elevated cholesterol, and smoking, has the potential to extend the time of onset, and rate of cognitive decline, in Alzheimer’s disease patients (see Taking Control of Brain Health figure). 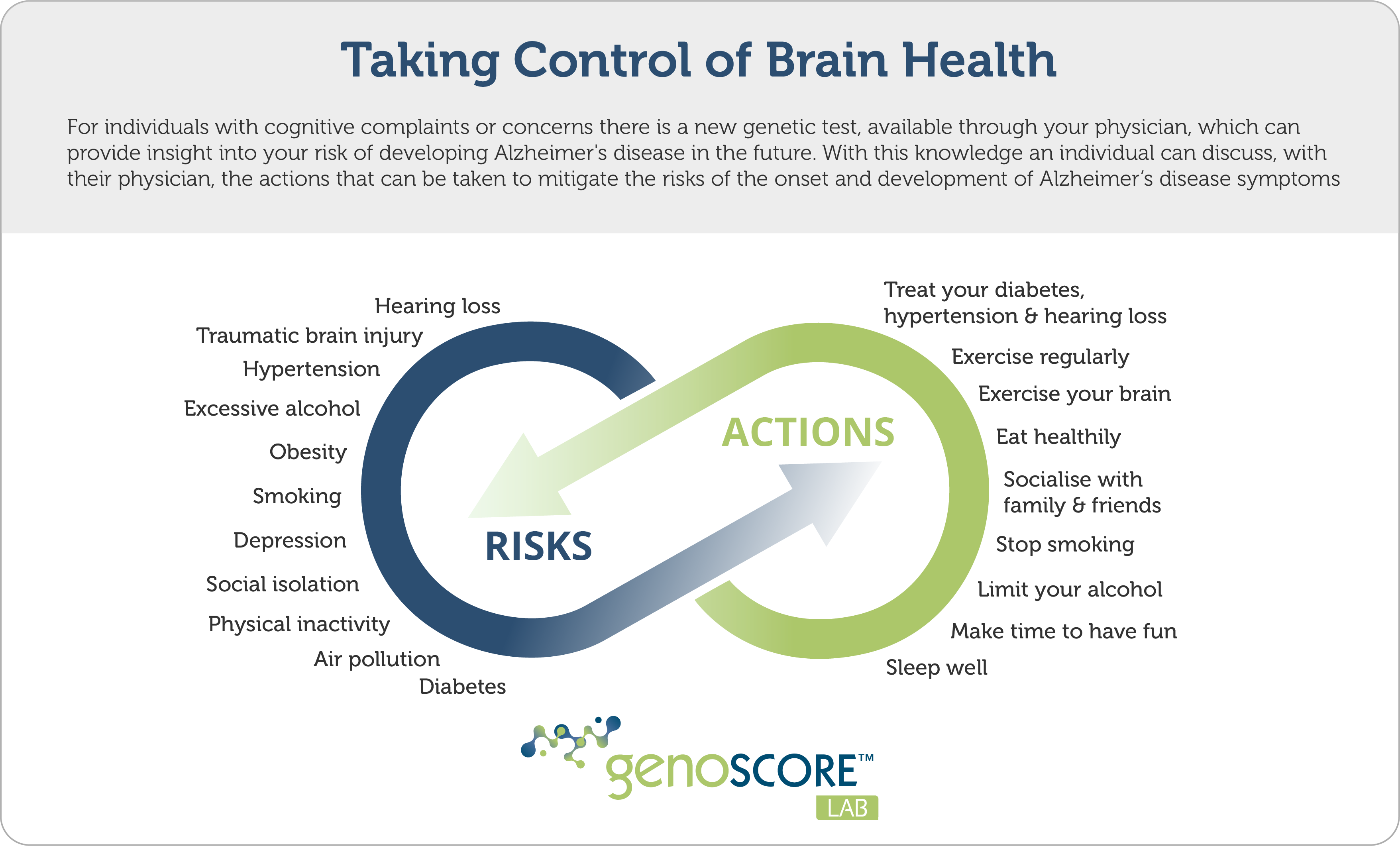 Prof. Clive Ballard, Pro-Vice Chancellor for Medicine at the University of Exeter notes: “Globally an estimated 10 million people develop dementia each year, with more than half as Alzheimer’s disease. The economic impact of the disease is estimated at trillions of dollars a year, and is rising6. genoSCORE-LAB has a valuable role to play in both the management of people with dementia, and the critical work to develop new drugs to treat the disease.”

Additionally, genoSCORE-LAB enables developers of new Alzheimer’s disease drug therapies to identify and recruit patients to clinical studies, ensuring the selection of the most suitable candidates, those most likely to experience cognitive decline over the time period of the study.

Without new drug therapies, the economic and healthcare cost burden of dementia – including Alzheimer's disease (AD) – will continue to rise, and now exceeds $1tn per year6. AD – a highly complex disease with risk factors based in genetics, lifestyle, age, and environment – has seen no new approved drug therapy since 2003; and clinical trial failure rates run at 99%7. Cytox’s products genoSCORETM-LAB and genoTORTM use Polygenic Risk Scoring (PRS) to predict the risk of individuals developing AD, and to improve clinical trial outcomes through patient stratification and the genetic characterisation of the disease. Cytox’s genoSCORE-LAB test has the potential to transform the diagnosis and prognosis of Alzheimer’s disease, unlocking a number of new approaches to treating and managing this critical disease. Cytox has ISO 13485 accreditation, for the provision of medical devices to meet customer and regulatory requirements.

Physicians can register and order a genoSCORE-LAB test for patients via the web portal. www.genoscore-lab.com

This test is a measure of relative risk for future onset of Late-onset Alzheimer’s disease (LOAD) and should not be considered as standalone diagnostic test. A high genoSCORE test result does not indicate that an individual will definitively develop LOAD in the future, and conversely a low genoSCORE result does not categorically mean that subsequent onset of LOAD will never occur. The test result should be used in conjunction with other information available to the physician. At this time, the test is validated for use in individuals of European ancestry only.